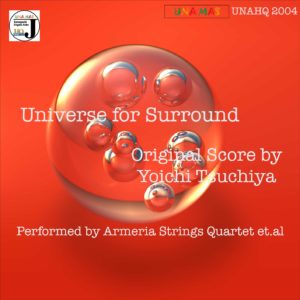 Info for Universe for Surround

This album was made entirely from the concept of surround sound.

All the songs were written with surround sound in mind, and the recording was done using every aspect of the surround technique to create a full orchestral sound with only 4 musicians.

The Ameria Strings Quartet has taken part in many international concours, often ending at the top of the rankings.

Yohichi Tsuchiya was born in Shibuya, Tokyo. He started working as a mainly piano based composer at the age of 20. In 2011 he graduated from the Tokyo University of Fine Arts and Music.

Equally impressed was Morten Lindberg of the prestigious 2L label, saying he had “never heard something like this before”.